Karlsruher Schieneninfrastruktur-Gesellschaft mbH (KASIG) is putting its trust in the civil engineering competence of Ed. Züblin AG. The STRABAG Group subsidiary is leading a consortium with Schleith GmbH to build the Kriegsstraße car tunnel in Karlsruhe. The two-lane tunnel in Kriegsstraße is the second part of the Kombilösung public transport infrastructure project to build an efficiently functioning rail network for the local public transport and to reduce the volume of traffic in central Karlsruhe. The contract for the road tunnel has a value in the low triple-digit millions.

“We are pleased that our ZÜBLIN sub-division in Karlsruhe has been awarded the contract for this challenging infrastructure project. The car tunnel in Kriegsstraße will make room for the tram as well as for pedestrians and cyclists. It is a central component of a groundbreaking traffic concept that will give downtown Karlsruhe a whole new quality of life,” says Thomas Birtel, CEO of STRABAG SE.

Construction is set to begin in April 2017, with completion scheduled for mid-2021. The tunnel will then reroute the through-traffic on Kriegsstraße underground for a length of approx. 1.6 km between Mendelssohnplatz and Karlstor. Instead of using the tunnel-driving method, the road tunnel will be built via cut-and-cover in a rectangular reinforced concrete frame. The ZÜBLIN-led consortium will first build a concrete trench up to nine metres deep, which will then be covered with a lid upon which the tram tracks are to be laid. The works can be subdivided into nine construction fields that will be cut, concreted and covered from the top. The adjacent buildings and the high groundwater level make the process of waterproofing and retaining the excavation pit a formidable challenge.

+++ Ed. Züblin AG and Schleith GmbH hand extended shell for street tunnel over to KASIG after four years and three months construction time +++ 1.6 km tunnel to reduce vehicle traffic in the centre of Karlsruhe over the long term +++ Traffic scheduled to open in mid-December following overall completion of technical works +++ 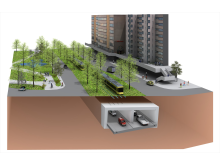 Kriegsstraße in Karlsruhe is to be rerouted underground along a 1.6 km section by the year 2021 to make room for a new tram line.