All good things come in threes: With the symbolic groundbreaking ceremony for the Elbterrassen III residential construction project in Geesthacht, the project participants and Mayor Olaf Schulze today gave the official starting signal for the construction project on the banks of the river Elbe east of Hamburg. ZÜBLIN Subdivision North is realising the new building complex with 136 apartments spread over six four- to seven-storey flat-roof buildings on a site covering approximately 7,600 m². The project is being developed under the leadership of ZÜBLIN Business Unit Hamburg/Schleswig-Holstein in the immediate vicinity of Elbterrassen I and II within a project schedule of 27 months. Elbterrassen III has a contract value of approx. € 39 million.

As was the case with the two preceding projects, all of which form part of the urban development at Westhafen in Geesthacht, ZÜBLIN Subdivision North also developed Elbterrassen III itself, from planning and design to construction, and has already sold most of the project to partners. The project can therefore be divided into the following three areas:

Directly adjacent to the neighbouring Elbterrassen II project, a four-storey flat-roof structure is being built streetside with 35 publicly subsidized apartments that have been purchased by Wohnraumentwicklung Geesthacht GmbH & Co. KG (WoGee) for rental at a later date.

Three new buildings with four to five storeys each and a total of 48 apartments were acquired by Gemeinnützige Baugenossenschaft Bergedorf-Bille eG for future subletting. A special feature here are the four shared units, each of which enables 3 to 4 residents to share their living space while enjoying generously sized private areas.

A seven-storey building directly on the banks of the Elbe and a five-storey building behind it offers a total of 53 owner-occupied flats being marketed by Sparda Immobilien GmbH on behalf of ZÜBLIN.

The entire new complex is connected by a single underground car park. The exterior appearance of the buildings is defined by high-quality faced brickwork façades and attractively designed outdoor areas. Most of the apartments offer a view of the river Elbe.

Elbterrassen II to be completed earlier than planned

ZÜBLIN Subdivision North successfully completed its first in-house development in Geesthacht, Elbterrassen I, with 97 residential units in mid-2018. The construction of the neighbouring Elbterrassen II complex, with seven buildings and 244 apartments has been underway since January 2019. According to estimates by the project team, the second project will probably be completed and ready for handover by the middle of next year – several months earlier than planned (Q4/21).

+++ Construction of another 244 residential units in an attractive location along the river Elbe +++ Project value of approx. € 57 million, completion in Q4/2021 +++ Follow-up project to Elbterrassen Geesthacht I +++

Topping out ceremony for Elbterrassen in Geesthacht near Hamburg 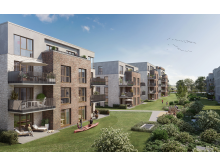 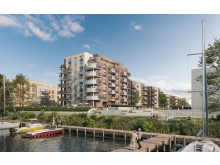 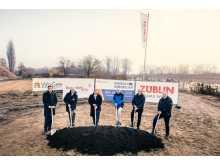