Züblin Scandinavia AB, a Swedish subsidiary of publicly listed STRABAG, has been awarded the contract by the Swedish Transport Administration (Trafikverket) to build FSE309 Lovö Interchange, a part of the Stockholm Bypass road project. The interchange is situated in a nature reserve with a sensitive historico-cultural background. The project, which has a contract value of SEK 505 million (approx. EUR 49 million), comprises the construction of a new four-lane road with interchanges, pedestrian and cycle paths, rock tunnels, a service tunnel, concrete troughs, etc.

The Lovö Interchange serves as a connection between the Stockholm Bypass tunnel ramps and the surface road network on Ekerö/Lovö islands via the existing Ekerövägen (Road 261).

”We are very pleased to have again gained the confidence of Trafikverket (Swedish Transport Administration) to build another stage of the Stockholm Bypass and to contribute to and develop the infrastructure in Stockholm. We look forward to good cooperation with the Swedish Transport Administration, so that we can together take the challenge of building in such a sensitive natural and historico-cultural area,” says Pär Land, Managing Director of Züblin Scandinavia AB.

Züblin possesses extensive experience in infrastructure projects and ground engineering. Other projects already realised by Züblin include the Northern Link and the City Line in Stockholm as well as ongoing projects such as the Marieholm Tunnel in Gothenburg, the Akalla Interchange, a part of the Stockholm Bypass and the expansion of the Södertälje Canal and Lock.

STRABAG SE is a European-based technology group for construction services, a leader in innovation and financial strength. Our services span all areas of the construction industry and cover the entire construction value chain. We create added value for our clients by our specialised entities integrating the most diverse services and assuming responsibility for them. We bring together people, materials and machinery at the right place and at the right time in order to realise even complex construction projects – on schedule, of the highest quality and at the best price. The hard work and dedication of our close to 73,000 employees allow us to generate an annual output volume of more than € 14 billion. At the same time, a dense network of numerous subsidiaries in many European countries and, also, on other continents is helping to expand our area of operation far beyond the borders of Austria and Germany. More information is available at www.strabag.com.

Züblin Scandinavia AB has been active in advanced deep foundations and infrastructure projects on the Swedish market since 2005. The company is a subsidiary of Ed. Züblin AG, one of Germany’s leading construction companies with an annual output of over € 3 billion. ZÜBLIN attaches great importance to partnership-based cooperation as a subsidiary of globally operating STRABAG SE. More information is available at www.zueblin.se 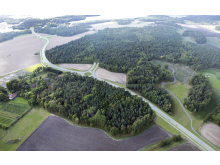 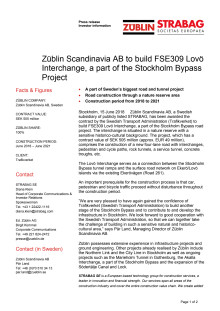