In the presence of the Geesthacht council group leaders and the city’s mayor, the project partners behind Elbterrassen II yesterday laid the foundation stone for the residential project in Geesthacht, southeast of Hamburg. Here, on a 15,000 m² plot of land, ZÜBLIN Subdivision North is realising seven four- to five-storey buildings with 244 apartments as well as two underground car parks with 217 parking spaces. The project value for this second construction phase of Elbterrassen, located directly on the river Elbe, amounts to approx. € 57 million.

The construction project with a total gross floor area of approx. 31,000 m² is divided into three sections: 105 privately financed rental apartments that have been acquired by Bergedorf-Bille Baugenossenschaft eG, 67 owner-occupied apartments being marketed by Sparda Immobilien GmbH under the name “WATERKANT” and 72 rental units that are partially subsidised by the public sector. The latter were acquired by a subsidiary of NORD PROJECT Immobilien und Beteiligungsgesellschaft mbH that is associated with the Moses Mendelsohn Foundation.

Olaf Dose, head of project management at ZÜBLIN North, praised the swift project planning and design phase for the project: “It only took two years from the initial project idea, through the approval procedures, to the complete marketing of the rental apartments and the start of construction. Many thanks to everyone who made this tight time frame possible for the largest integrated multi-storey residential construction project in Geesthacht in recent decades!”

Publicly subsidized housing for the Hamburg Metropolitan Region
A total of 61 apartments with 1–3 rooms are being publicly funded and rented at a price of € 5.95/m². The construction of the affordable apartments is part of the concept of Elbterrassen Geesthacht II, which was designed by Ed. Züblin AG together with Siebrecht Münzesheimer Architekten. Elbterrassen belong to the new Wohnen am Westhafen urban development project in Geesthacht that is being realised in several phases. In the summer of last year, the first residents moved into a nearby portion of the development, Elbterrassen Geesthacht I, which was also built by ZÜBLIN. So far, only the residential complex of NORD PROJECT offers publicly subsidised housing in the entire development. Gerrit M. Ernst, managing director of NORD PROJECT: “For us, subsidised residential projects are becoming an increasingly important part of project development work. When, as with this cooperation with Ed. Züblin AG, we can realise such objects in an excellent location, not far from the water, that is something very special.” The apartments will be part of the portfolio of MMW NORD, the joint housing company of the Moses Mendelssohn Foundation and NORD PROJECT.

Olaf Schulze, mayor of the city of Geesthacht, is convinced that the proportion of low-cost apartments will further increase the attractiveness of the newly emerging residential district. “This makes it possible for people to live here who would not otherwise be able to afford such a location,” Schulze said at the laying of the foundation stone. The good infrastructure in the area, including shops, schools, restaurants and theatres, also has a positive effect. The city is even building one of the construction phases at Westhafen Geesthacht on its own. “There we will have completely new retail space, a day-care centre and a retirement home, providing necessary services for functioning communities,” Schulze pointed out. He also praised the good public transport links to the city centre and Hamburg.

Stuttgart-based Ed. Züblin AG has about 14,000 employees and, with an annual output of about € 4 billion, is one of Germany’s largest construction companies. Since it was founded in 1898, ZÜBLIN has been successfully realising challenging construction projects in Germany and abroad and today is STRABAG Group’s leading brand for building construction and civil engineering. The company’s range of services comprises all construction-related tasks – from civil engineering, bridge building and tunnelling to complex turnkey construction to construction logistics, structural timber engineering and public-private partnerships. ZÜBLIN attaches great importance to partnership-based cooperation, and our ZÜBLIN teamconcept has proved its value as a successful partnering model for about 25 years now. Current construction projects of the company, a subsidiary of globally operating STRABAG SE, include the new Axel Springer building in Berlin, the Rinsdorf and Rälsbach viaducts on the A45 motorway, and the Albabstieg Tunnel along the new Wendlingen–Ulm railway line. More information is available at www.zueblin.de 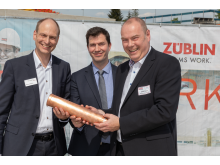 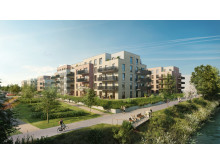