Züblin Stahlbau GmbH inaugurated its new industrial blasting and coating facility in Sande in the district of Friesland in the presence of local politicians and representatives of the press on September 27th, 2018. ZÜBLIN invested about € 3.5 million in the modernisation of the equipment and the production hall to bring the site up to the state of the art.

The new facility fulfils all the legal requirements, is more efficient, and can process significantly larger and heavier components than before. The site will be able to blast and coat elements measuring up to 56 m in length and weighing up to 120 t, something that is possible in only a few steel manufacturing plants in Germany.

The blasting and coating facility was built under ongoing production in a record time of nine months. Concurrently, parts of the façade of the production hall were given an energetic retrofit, the crane concept was reworked and the approximately 40-year-old floors in the existing halls were renovated to remove uneven patches and avoid the time-consuming effort of positioning the parts. Of advantage especially for the bridge building process is that the repositioning of the overhead cranes now makes it possible to mass-produce building parts and deliver them to the construction site faster than before.

Everything under a single roof: increased productivity and quality
Following an intense investigation of all possible alternatives, the management of ZÜBLIN Structural Steelworks made the decision to integrate the new blasting and coating facility in the existing production hall (Hall C1). While this reduces the amount of space available for manufacturing, it is now possible to handle all production steps for the bridge building process under a single roof. This greatly reduces transport distances and shortens communication lines. “This facility represents an investment in the future of Sande and an enormous improvement of the working conditions for our employees,” says a clearly satisfied Marco Eckert, technical managing director at Züblin Stahlbau GmbH. “We expect to see increased productivity and an additional quality boost as a result.”

Züblin Stahlbau GmbH, based in Hosena, is the ZÜBLIN Group’s construction service provider for challenging projects involving steel buildings, steel bridges and façades. With two state-of-the-art structural steel manufacturing plants, competent engineering offices, and experienced project and assembly teams, the 100 % subsidiary of Ed. Züblin AG carries out projects of all sizes. The company has about 350 employees and is one of the leading German structural steelwork enterprises with Europe-wide project experience. Current projects include the construction of four steel and composite steel bridges across the A43 motorway near Recklinghausen, the Schorgast Viaduct (Kulmbach, Bavaria) and the extension of the existing hangars for Elbe Flugzeugwerke GmbH Dresden.

Stuttgart-based Ed. Züblin AG has about 14,000 employees and, with an annual output of almost € 4 billion, is one of Germany’s leading construction companies. Since it was founded in 1898, ZÜBLIN has been successfully realising challenging construction projects in Germany and abroad and is the number one in the German building construction and civil engineering segment. The company’s range of services comprises all construction-related tasks – from civil engineering, bridge building and tunnelling to complex turnkey construction to construction logistics, structural timber engineering and public-private partnerships. ZÜBLIN attaches great importance to partnership-based cooperation, and our ZÜBLIN teamconcept has proved its value as a successful partnering model for about 25 years now. Current construction projects of the company, a subsidiary of globally operating STRABAG SE, include the new Axel Springer building in Berlin, Messehalle 12 in Frankfurt and the Albabstieg Tunnel along the new Wendlingen–Ulm railway line. More information is available at www.zueblin.de 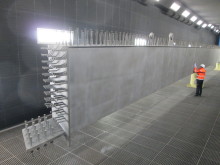