Stuttgart-based Ed. Züblin AG closed the 2015 financial year with further growth of the output volume, but without attaining the same very good EBT as the previous year, said management board member Dr. Alexander Tesche, speaking at today’s financial press conference. Due to the good orders situation and the indications of a recovery of the German construction economy, however, the ZÜBLIN Group still expects significant earnings growth even on a small increase of the construction output for 2016. The volume of new orders of the Züblin Group in 2015 sank by 10 % versus the previous year to settle at € 3.1 billion. A plus of new orders in turnkey construction was not enough to compensate declines in the civil engineering business, at the production facilities and among the special divisions. Of the group’s new orders, € 2.3 billion, or 74 %, were acquired in Germany – compared to 67 % the previous year. The largest new contracts include the shopping centres LOOM in Bielefeld and Alter Wall in Hamburg as well as the residential and commercial building ALEA at the former Opel site in Frankfurt am Main.

The construction output in the year under report grew according to plan by 3 % to € 3.4 billion. Growth in the group was registered in the business fields of turnkey construction and civil engineering. Of the total output, 73 % was generated in Germany and 27 % abroad – compared to 26 % the previous year.

The ZÜBLIN Group’s unusually high order backlog in the previous year – the approx. € 4.3 billion at the start of 2015 exceeded the planned output for the entire year – fell back by 6 % to € 4 billion over the past financial year. The decline was distributed equally across the national and international business.

On the reporting date of 31 December 2015, the Züblin Group had a total of 13,983 employees working for it, which corresponds to a decline of approx. 8 % versus the previous year. Overall, Tesche said, the earnings development in 2015 was not satisfactory for the Züblin Group. In Germany, project losses in the Rhine-Main region and another weak year in the timber construction business impacted earnings negatively. Outside of Europe, a project in the United Arab Emirates required additional risk provisioning. As a result, the earnings before taxes (EBT) fell back from € 59 million to € 50 million. Due to a lower income tax burden, however, the group nevertheless managed a slight improvement of the earnings after taxes in the amount of € 35 million versus € 32 million the year before.
The equity ratio for the ZÜBLIN Group, at about 27 %, was 1 percentage point above the previous year’s figure. The equity (including third-party shareholdings) was reported at € 524 million on 31 December 2015 (previous year: € 482 million). The cash and cash equivalents in the group exceeded the previous year’s value by € 18 million, reaching about € 802 million at the end of 2015.

In the individual financial statement, Ed. Züblin AG reported net income of € 24 million (previous year: € 39 million) as well as a balance sheet profit of € 12 million (previous year: € 19 million). In light of the positive outlook and the high liquidity, the management board will propose to the Annual General Meeting a dividend of € 0.90/no-par share.
According to Tesche, Züblin started the ongoing financial year with considerable order growth. In the first quarter of 2016, the Züblin Group registered a plus of about 11 % in new orders to € 798 million (previous year: € 721 million). As the impact from the large new orders on the output volume will not be felt until the second half of 2016, the output volume in the first three months of the year declined by 8 % to € 716 million. The order backlog on 31 March 2016 was again very high, standing at € 4.1 billion, even if it did not quite reach the record value of the previous year. On the reporting date of 31 March 2016, Züblin had 13,300 employees – 1,458 fewer than the year before. Tesche sees the Züblin Group as being overall well-prepared for the 2016 financial year and in a good position both in Germany and abroad. The very good liquidity gives Züblin considerable competitive advantages. With the security of a high order backlog, the company can continue to selectively review the market and the available offers especially in Germany. All in all, Züblin expects to generate a slightly increased output volume and a considerably improved net income in 2016. 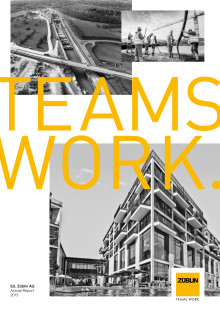 Overall, ZÜBLIN closed the year with yet another increase in construction output, however, earnings before taxes (EBT) as well as orders on hand and orders received fell short of the previous year’s figures.