After some four weeks of construction, ZÜBLIN last weekend handed over the new arch bridge across the Höllentalklamm Gorge, including two walkways leading up to the bridge, to the German Alpine Club’s Garmisch-Partenkirchen section.

“The preparations and finally the execution of this sponsorship project against the very special backdrop of the Höllentalklamm was really fantastic. The teams from the various project participants worked wonderfully together, like pieces of a well-oiled machine,” sums up ZÜBLIN site manager Philipp Schön. “Eight colleagues from ZÜBLIN were on site, supported by four trainees from the STRABAG Group’s training workshop in Bebra and up to three employees from the local construction company Florian Dörfler. The interaction with the German Alpine Club’s Garmisch-Partenkirchen section, whose volunteers actively helped out wherever possible and who also took care of the catering, was excellent.”

To transport the bridge weighing over 4 t into the narrow gorge, it was divided into some 600 individual parts, some of which were flown to the entrance of the gorge by helicopter from where they had to be transported manually to the site for assembly. The custom bridge and walkway elements were prefabricated by ZÜBLIN’s Structural Steelwork subdivision in Hosena, Brandenburg.

Despite almost perfect preliminary planning, a few obstacles were inevitable. Removing the rock where the bridge supports were anchored proved to be significantly more difficult and time-consuming than had been expected. In order to complete the work on time, the team received additional support from two further ZÜBLIN colleagues from Hosena.

As soon as the gorge reopens after the winter break, tourists will again be able to pass through safely on their way to the Zugspitze.

Stuttgart-based Ed. Züblin AG has about 14,000 employees and, with an annual output of about € 4 billion, is one of Germany’s largest construction companies. Since it was founded in 1898, ZÜBLIN has been successfully realising challenging construction projects in Germany and abroad and today is STRABAG Group’s leading brand for building construction and civil engineering. The company’s range of services comprises all construction-related tasks – from civil engineering, bridge building and tunnelling to complex turnkey construction to construction logistics, structural timber engineering and public-private partnerships. ZÜBLIN attaches great importance to partnership-based cooperation, and our ZÜBLIN teamconcept has proved its value as a successful partnering model for about 25 years now. Current construction projects of the company, a subsidiary of globally operating STRABAG SE, include EDGE East Side Berlin,, the Rinsdorf and Rälsbach viaducts on the A45 motorway, and the Boyneburg Tunnel on the A44 motorway. More information is available at www.zueblin.de

The ZÜBLIN/STRABAG team, together with Florian Dörfler and the German Alpine Club’s Garmisch-Partenkirchen section, completed the new bri...

A helicopter flew the individual segments of the bridge as well as the scaffolding as close as possible to the installation site.

The ZÜBLIN Structural Steelworks team produced the steel components for the bridge and the two walkways at its plant in Hosena, Brandenbu... 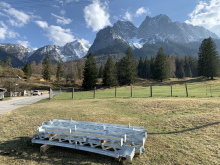 The components for the bridge and walkways were transported by truck to the town of Grainau where the Höllentalklamm is located. From the...

The arch bridge and the two walkways are covered with wooden planks.

The STRABAG trainees installed the wooden coverings on the bridge and walkways against a backdrop that you don’t see every day.

All safety equipment had to be reviewed before starting into the gorge.