Just around nine months after the symbolic laying of the foundation stone, the topping-out ceremony for the AntoniterQuartier in Cologne was celebrated today. As general contractor, Ed. Züblin AG is building a new urban mixed-use development on behalf of the Protestant Church of Cologne according to a design by the Cologne architect office trint + kreuder d.n.a. and Greenbox Landschaftsarchitekten. Numerous guests of honour were invited to the topping-out ceremony, including the mayor of Cologne, Henriette Reker, who also gave the words of greeting.

The ceremony was continued by representatives of the Protestant Church of Cologne (Pastor Markus Herzberg of the Antoniterkirche and Pastor Mathias Bonhoeffer, Chairman of the Presbytery of the Protestant Church of Cologne), by the design architects Kay Trint and Hanno Kreuder, and by project manager Hermann Ulrich (managing director of ulrich hartung GmbH). Speaking for ZÜBLIN were Ulrich Müntefering (technical subdivision management) and Christoph Meyer (foreman) who recited the topping-out speech.

Modern mixed-use building ensemble in the heart of Cologne
The Protestant Church of Cologne is building a new urban mixed-use development on an approx. 3,300 m² plot of land directly on Schildergasse between the late-gothic Antoniterkirche and the architecturally stunning Weltstadthaus by Renzo Piano. The attractive mixed-use building ensemble in the centre of Cologne is being built under the motto “Church. Space. Life in the City” with a gross floor area of around 9,900 m².

At the heart of the AntoniterQuartier are the gothic Antoniterkirche with the new church square as well as a modern city church centre with two event halls and a green roof terrace. From the end of this year, a variety of religious and cultural events will be held here for a broad audience. Stylish restaurant establishments with attractive outdoor areas in the churchyard will turn the AntoniterQuartier into an oasis of relaxation in the bustling Schildergasse shopping area.

In addition to the church and the cultural and culinary offerings, the AntoniterQuartier will also accommodate 18 rental flats and apartments, modern office areas and an underground car park with 18 parking spaces.

The AntoniterQuartier was the focus of international attention last year after the foundations of Germany’s oldest verifiable library were discovered on the construction site. The historically important find is to be integrated into the new AntoniterQuartier building and – with further valuable artefacts from the site – made accessible to the interested public.

Topping-out ceremony for AntoniterQuartier in Cologne 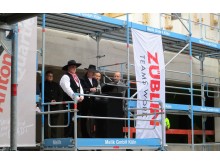 Topping-out ceremony for AntoniterQuartier in Cologne 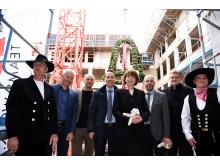