Volksbank eG Braunschweig Wolfsburg (Volksbank BraWo) has commissioned ZÜBLIN with the turnkey construction of Business Center III in Braunschweig. Work on the building complex, consisting of an office tower with 19 floors and a base building with four floors, is currently getting underway, with completion scheduled for December 2022. The contract, being performed by ZÜBLIN Subdivision North / Business Unit Lower Saxony, has a value of around € 50 million. In addition to 19 office floors with a usable floor space of nearly 13,000 m², the contract also includes an underground car park with about 30 parking spaces. A further 210 parking spaces for future users will be provided in the car park of the neighbouring shopping centre.

Business Center III (BC III) adds another attractive building to the BraWoPark shopping and business centre at Braunschweig’s main railway station. The building complex currently consists of Business Centres I and II, a hotel and a shopping centre on a property comprising around 75,000 m². The façade of the new building with its dark red/brown elements blends in with the colour concept of the existing buildings.

City of Braunschweig as single tenant

Depending on the final utilisation concept, Business Centre III will offer space for up to 600 workplaces for the city of Braunschweig, which has signed a lease for the entire building. The city plans to consolidate many smaller administrative units that are currently scattered throughout the city at BC III on a permanent basis. At the tenant’s request, the building complex will be able to accommodate not only one-to-three-person offices and open-plan offices but also multi-space offices with corresponding functionalities. A large conference area is planned for the ground floor of BC III with four meeting rooms and a foyer including break area. Additional meeting rooms are located on the gallery of the first floor, which can be accessed from the entrance hall via an open staircase. BC III will be connected to the existing Business Centre II at the basement level, which will also house parts of the mechanical and electrical systems, a bicycle storage room and the underground car park with around 30 parking spaces (some with electric vehicle charging stations). 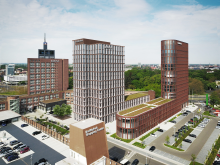