DEGES (Deutsche Einheit Fernstraßen-planungs- und -bau GmbH) has awarded Ed. Züblin AG the contract for the approximately 6 km long third section of the BAB 44 highway between Kassel and Herleshausen. The A44 highway is part of German Unity Transport Project No. 15 and is intended to close the gap in the federal highway network between the BAB 7 highway near Kassel and the BAB 4 highway near Wommen. The contract value for this section amounts to approx. € 183 million. The section starts east of the town Wehretal-Oetmannshausen and extends southwards to the Sontra-West junction. The project’s centrepiece is the 1.7 km long Boyneburg tunnel which consists of two two-lane tunnel tubes. These tubes are connected by five emergency cross passages, and each of them is provided with two emergency bays. A 2.3 km long section of the BAB 44 highway will be constructed north of the tunnel, a 2.1 km long section south of it. These sections require extensive civil engineering and ground engineering works: a total of five underpasses and ramp structures, seven bearing walls, retaining structures and three bridges will have to be constructed.

In addition to ZÜBLIN’s Tunnelling Subdivision, which will act as general contractor in this project, STRABAG Large-Scale Projects South-East and Waterproofing as well as ZÜBLIN Ground Engineering will be involved in the execution of these construction works. Thomas Birtel, Chief Executive Officer of STRABAG SE, is very pleased with the successful acquisition: “We are proud that our intragroup cooperation in this project will make another contribution to the long-awaited closing of the gap in the strategically important East-West connection.”

This is already the third contract awarded to the STRABAG group as part of the fitout of the BAB 44 highway between Kassel and Herleshausen: Since 2016, ZÜBLIN and STRABAG have been executing construction works for a 700 m long highway bridge over the Hessian community Wehretal. Not far from there, ZÜBLIN is involved in the construction of the Trimberg tunnel which is part of the section between Waldkappel and Ringgau.

STRABAG SE is a European-based technology group for construction services, a leader in innovation and financial strength. Our services span all areas of the construction industry and cover the entire construction value chain. We create added value for our clients by our specialised entities integrating the most diverse services and assuming responsibility for them. We bring together people, materials and machinery at the right place and at the right time in order to realise even complex construction projects – on schedule, of the highest quality and at the best price. The hard work and dedication of our nearly 73,000 employees allow us to generate an annual output volume of more than € 14 billion. At the same time, a dense network of numerous subsidiaries in many European countries and on other continents is helping to expand our area of operation far beyond the borders of Austria and Germany. More information is available at www.strabag.com.

Stuttgart-based Ed. Züblin AG has about 14,000 employees and, with an annual output of almost € 4 billion, is one of Germany’s leading construction companies. Since it was founded in 1898, ZÜBLIN has been successfully realising challenging construction projects in Germany and abroad and is the number one in the German building construction and civil engineering segment. The company’s range of services comprises all construction-related tasks – from civil engineering, bridge building and tunnelling to complex turnkey construction to construction logistics, structural timber engineering and public-private partnerships. ZÜBLIN attaches great importance to partnership-based cooperation, and our ZÜBLIN teamconcept has proved its value as a successful partnering model for about 25 years now. Current construction projects of the company, a subsidiary of globally operating STRABAG SE, include the new Axel Springer building in Berlin, Messehalle 12 in Frankfurt and the Albabstieg Tunnel along the new Wendlingen–Ulm railway line. More information is available at www.zueblin.de 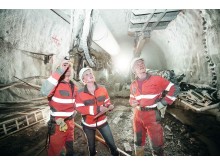