A joint venture of STRABAG subsidiary ZÜBLIN and BAM Deutschland AG is building the new Willich I prison. The contract was awarded by the client Bau- und Liegenschaftsbetrieb NRW and has a value in the low triple-digit-million Euro range. Planned according to modern prison standards, the new buildings replace the outdated, partly dilapidated, existing buildings from the years 1900 to 1905, most of which were already demolished in advance. With a significant increase in capacity from 400 to 768 prison places for male prisoners, the construction project also takes into account the increased space requirements at the prison location in Willich-Anrath. The extensive project with a gross floor area of 63,661 m² includes the construction of two detention houses, a multi-purpose building, a workshop building with a gym, a sports field, connecting corridors and a parking lot. The project will be constructed over a period of five years and is divided into two separate construction phases. In November 2020 the joint venture will commence construction with completion scheduled for the end of 2025.

Among other things, with covered saddle roofs, clinker facades and panoptics in the cell tracts, the new building is architecturally based on the style of the early 20th century. On the prison grounds, the Willich I JVA complements the adjoining Willich II JVA, which was newly built in 2009 for female prisoners, and the newly built common gate building. The protective wall around the two prisons has also already been renewed.

The necessary division of the construction project into two parts and the associated complexity is due to the fact that the continued operation of the prison must be guaranteed without security restrictions. For this purpose, a number of structural interim solutions are to be implemented. In the first construction phase, the joint venture JVA Willich I will build the new prison house 1 on the former site of the JVA Willich II (women's prison) by mid 2023. At the same time, the multi-purpose building, the workshop building and parts of the outdoor facilities of the parking lot will be built. After the Willich I prison has moved to the newly built prison house 1 and the old building has been torn down, the new prison house 2 will be built on this part of the site in the second construction phase beginning 2024. Simultaneously, BAM and ZÜBLIN will build the connecting corridors and sports fields and complete the multi-purpose building, the workshop building, the outdoor facilities and the parking lot.

Generous space for workshops and businesses

The future JVA Willich I will essentially consist of two four-storey prison buildings with a cross-shaped floor plan. A three-storey multi-purpose building will house the administration, the medical department as well as school, common and church rooms. The workshop building, which has also three floors, will in future accompany the in-house businesses (including a bakery, a carpentry and a print shop) and training organisations (for prospective bakers and building cleaners) as well as workshops, a sports area and business workrooms.

BAM Deutschland AG has been part of Dutch Royal BAM Group since 2007. Together with our subsidiaries BAM Immobilien-Dienstleistungen, BAM Sports and BAM Swiss, we are active on the German and Swiss markets and are among the leading companies in German turnkey construction. In cooperation with our sister companies, we as BAM Deutschland AG are also involved in international projects. The headquarters of BAM Deutschland AG is in Stuttgart. We have a total of six other offices located in Germany and Switzerland. Around 900 employees deliver a wide variety of projects in partnership with the customer and are constantly working on innovative and efficient solutions for the construction industry. Our competencies include planning, building and operating large turnkey projects such as clinics, stadiums, hotels, prisons, shopping centers and administrative buildings. Further information at https://www.bam-deutschland.de/de. 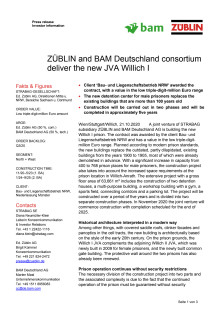 +++ Client ‘Bau- und Liegenschaftsbetrieb NRW’ awarded the contract, with a value in the low triple-digit-million Euro range +++ The new detention center for male prisoners replaces the existing buildings that are more than 100 years old +++ Construction will be carried out in two phases and will be completed in approximately five years +++