Ed. Züblin AG, Helix Pflanzen GmbH and the German Institutes of Textile and Fiber Research (DITF) have successfully completed their joint MoosTex research project (4/2017–4/2020) with modular moss panels. The panels are capable of systematically binding particulate matter for a lasting contribution to cleaning the air in heavily trafficked urban areas and city centres. Starting with an innovative idea from ZÜBLIN, the project partners have developed a biological solution to air pollution with enormous market potential. Not only do the modular panels filter particulate matter from the air, they also reduce traffic noise, bind carbon dioxide and, thanks to their ability to store moisture, improve the urban climate through evaporative cooling. ZÜBLIN and Helix intend to jointly market this green innovation and have already begun commercialisation planning. ZÜBLIN project manager Andreas Kugler has also announced that a pilot project is in the pipeline: “We want to use the experience gained in this project to start a pilot project in the Stuttgart area this winter.” Promising talks with potential partners are already ongoing.

The multifunctional pollution-reducing effect of the moss panels was tested and demonstrated by the MoosTex project partners in three years of research with extensive examinations in the laboratory and on test walls in the real world. A simulation under real environmental conditions at Neckartor, a busy traffic junction in Stuttgart, showed that a 2.50 m high moss panel can absorb between five and ten percent of the particulate matter (PM10; max. 10 μm diameter) from the daily motor vehicle exhaust gases. Given a traffic volume of around 63,000 vehicles a day as registered in 2019, for example, the moss modules can absorb the particulate matter from the exhaust of 3,000 to 6,000 cars. As a direct consequence of road traffic, particulate matter is produced by exhaust fumes, swirling air and tire abrasion, among other things, which can lead to cardiovascular and respiratory ailments. According to the European Environment Agency (EEA), more than 400,000 people in the European Union die each year as a result of air pollution.

ZÜBLIN, Helix and DITF make use of a natural property of moss for their innovation: mosses absorb particulate matter as nutrients directly through the surfaces of their leaves. A portion of the particulate matter is metabolised, while the remaining part is broken down or dissolved by bacteria. This biological process is particularly effective in mosses because the intricate structure of their leaves gives them a large overall surface area (1 m² of mosses corresponds to a leaf surface of up to 40 m²) and particulate matter is attracted by the negatively charged leaves. And while mosses are only active when moist, they do not dry out in heat and dryness but rather enter a dormant phase.

Using this knowledge, the three MoosTex partners have developed a system that ensures the survival of the vertically planted mosses under real weather conditions in urban environments with the possibility to control their biological pollution-absorbing activity over all four seasons. The result is a modular panel with a lightweight aluminium frame, covered with a special functional textile structure that can be quickly and economically planted with mosses inside the greenhouse. An integrated irrigation system ensures control of the pollution-reducing function. By using and combining different types of mosses, the panels can be specifically adapted to different site-dependent climatic conditions. The selection, composition, cultivation and horticultural care of the mosses during the utilisation phase are the core responsibility of Helix Pflanzen GmbH.

Modular use as stand-alone panels or in walls and façades

The modular PM-binding system can be used flexibly and economically in urban areas with a high traffic volume. The individual modules can be variably combined in height and width, quickly expanded or modified, and their design even allows for integration into existing noise barriers. “Our system also offers enormous potential for further development, making it suitable for use in building façades,” adds ZÜBLIN project manager Andreas Kugler.

The MoosTex research project was financed by the Federal Ministry for Economics and Energy under its funding programme for small and medium-sized enterprises (ZIM-Zentrales Innovationsprogramm Mittelstand). 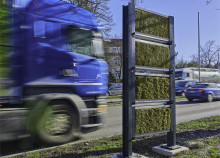 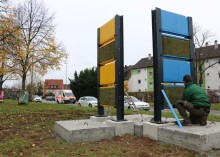 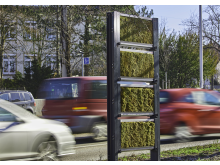 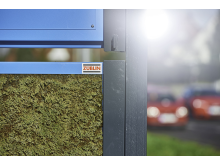 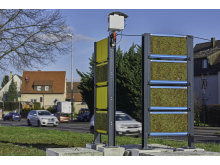