Twenty-five years ago, the STRABAG Group initiated a pioneering cultural change on German construction sites with the development of the nation’s first construction partnering scheme. In 1994, the company evolved the systematic alliance with clients and the teamwork among all project participants in practice with its first-ever application in this form during the Deutscher Ring project in Hamburg. Construction partnering, practiced at ZÜBLIN and STRABAG under the teamconcept partnering scheme, has since established itself across the industry – under various brand names – as a recognised principle for the efficient realisation of large and complex turnkey construction projects. Today, the early, fair and contractually regulated collaboration in joint teams starting already in the planning phase is an important way of guaranteeing the on-time and on-budget realisation of even demanding construction projects with many interfaces.

Flexible agreements for every project requirement

Over the last 25 years, ZÜBLIN has been able to convince many customers of the advantages of this cooperative philosophy. “From our clients to our project management to the construction team – anyone who has worked with teamconcept never wants to go back to the traditional way of project management. When everyone feels responsible and is able to contribute to the success of a joint project, this will automatically lead to a cultural change,” says Jens Quade, technical director at ZÜBLIN Nord and a teamconcept man from the beginning. Ed. Züblin AG’s share of revenue from teamconcept projects has remained stable at approx. 40 % for several years. Over the past two-and-a-half decades, ZÜBLIN has steadily evolved and refined the management method of project partnering. By combining clearly defined process modules (open tools) and six different contract models, ZÜBLIN teamconcept can be flexibly adapted to any project requirement. The partnering process has gained even further momentum with the increasing digitisation of construction processes. The consistent use of digital tools, especially Building Information Modelling (BIM® 5D), contributes to quality, deadline and cost security in teamconcept projects.

The list of successful projects completed under the ZÜBLIN teamconcept scheme includes the ADAC headquarters in Munich (2012), the Dancing Towers in Hamburg (2013), MILANEO in Stuttgart (2014), Upper West in Berlin (2017) and the recently completed Arena World of Sports in Herzogenaurach (2019), just to name a few. The Hamburg-based project development company ECE has built approximately 20 shopping centres under teamconcept since 1995. And real estate developer STRABAG Real Estate (SRE) regularly relies on teamconcept cooperation to realise its projects. Currently under construction together with ECE and ZÜBLIN, for example, is MesseCity, a completely new mixed-use development in Cologne. In addition to the new Axel Springer building in Berlin, MesseCity currently is the largest teamconcept project.

On the occasion of the teamconcept anniversary and just in time for the real estate fair Expo Real in Munich, ZÜBLIN is documenting the success story of its partnership model in a new film to be shown at the ZÜBLIN/STRABAG stand (C1.310). Further information about teamconcept can be found at www.zueblin-teamconcept.de.

Stuttgart-based Ed. Züblin AG has about 14,000 employees and, with an annual output of about € 4 billion, is one of Germany’s largest construction companies. Since it was founded in 1898, ZÜBLIN has been successfully realising challenging construction projects in Germany and abroad and today is STRABAG Group’s leading brand for building construction and civil engineering. The company’s range of services comprises all construction-related tasks – from civil engineering, bridge building and tunnelling to complex turnkey construction to construction logistics, structural timber engineering and public-private partnerships. ZÜBLIN attaches great importance to partnership-based cooperation, and our ZÜBLIN teamconcept has proved its value as a successful partnering model for about 25 years now. Current construction projects of the company, a subsidiary of globally operating STRABAG SE, include the new Axel Springer building in Berlin, the Rinsdorf and Rälsbach viaducts on the A45 motorway, and the Boyneburg Tunnel on the A44 motorway. More information is available at www.zueblin.de 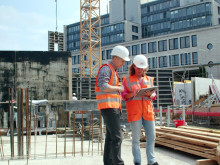 25 years ago, the STRABAG Group developed the foundations of its partnering model teamconcept and, as one of the pioneers of the partners... 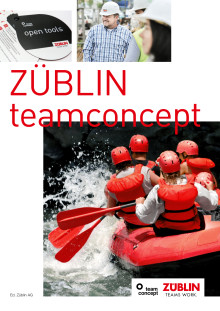 Successful and efficient construction – on a consistent and reliable level? We believe there’s one simple answer, which applies to every phase of a project. teamconcept makes success a common factor. It standardises the conditions for successful cooperation – without hidden agendas. teamconcept paves the way for fair and genuine cooperation.