Construction is proceeding as planned on the expansion of the Deutsche Telekom data centre in Biere. With the topping out ceremony, the construction joint venture DDC Biere BA 2, consisting of Ed. Züblin AG and ENGIE Deutschland GmbH Bau, reached a further milestone on 11 May 2017. The expansion of the Dynamic Data Center through three additional modules (Cluster 2) and one office building is completely on schedule.

Despite weather-related difficulties, the construction team managed to fully make up for the delays. The progress to date: approximately 24,000 m³ of concrete, 2,500 t of reinforcing steel and 2,200 m³ of masonry works.

Since early 2017, ZÜBLIN has been continuously transferring building areas to its joint venture partner ENGIE for the installation of the complex technical equipment in the approx. 5,400 m² large IT space. Expansion of the building services, such as electricity and cooling, began on schedule. The installations completed so far include 15 replacement power generators as well as underground fuel tanks and 6,500 m of pipes for cooling, water, heating and gaseous fire suppression systems.

To guarantee the smooth handling of the works, the joint venture partners designed and simulated the project in 3D. Work is proceeding according to a tight schedule following the principles of lean construction.

The Deutsche Telekom subsidiary T-Systems International GmbH, the tenant of the Dynamic Data Center, operates data centres worldwide. The complex in Biere will play a special role as a data hub for the international cloud business.

Together with the nearly identical T-Systems data centre in Magdeburg, the data centre in Biere forms part of a twin-core facility. In this type of data centre, all data are stored in parallel at two sites. In the event of an outage at one centre, the twin is immediately available to take its place so that all data are always available.

The twin data centres in Biere and Magdeburg – with construction led by ZÜBLIN – went online in 2014. The expansion of the Biere data centre by ENGIE and ZÜBLIN will increase cloud capacities at the site by 150 %.

Like the first section, Cluster 2 has also been submitted for LEED Gold Standard certification from the U.S. Green Building Council. With a PUE (Power Usage Effectiveness) value below 1.3, the new data centre in Biere is one of the most energy-efficient centres in its class. 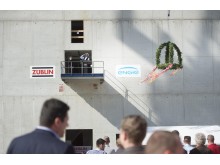 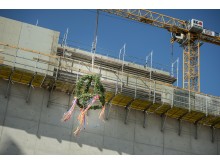 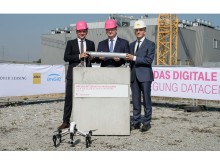 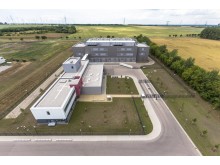 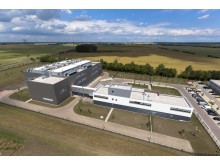