The design, construction and subsequent operation of the new building is being realised using the BIM 5D® (Building Information Modelling) method.

“We are delighted to be realising this prestigious project in a prime central location in the German capital. The architecturally ambitious new building will harmonise quite well with its surroundings,” said Thomas Birtel, CEO of STRABAG SE.

The new five-storey building with a usable area of over 10,000 m² is being built by STRABAG Sp. z o.o. on an approx. 8,500 m² plot of land. The watertight excavation is being carried out by ZÜBLIN Spezialtiefbau GmbH, another member of the STRABAG Group. In addition to offices and rooms for representative purposes, the building will also include an underground car park, planted rooftop terraces, two inner courtyards and an atrium. Large windows and a bright façade will define the building’s street-side appearance. The new embassy building was designed by the Warsaw-based architectural firm JEMS Architekci sp. z o.o.

The Polish Embassy had already occupied the site on which the new building is now being built from 1990 to 2014. Since the demolition of the old building in 2016, the embassy has been housed at an interim site in Berlin’s Grunewald district.

STRABAG SE is a European-based technology partner for construction services, a leader in innovation and financial strength. Our services span all areas of the construction industry and cover the entire construction value chain. We create added value for our clients by our specialised entities integrating the most diverse services and assuming responsibility for them. We bring together people, materials and machinery at the right place and at the right time in order to realise even complex construction projects – on schedule, of the highest quality and at the best price. The hard work and dedication of our more than 75,000 employees allow us to generate an annual output volume of around € 16 billion. At the same time, a dense network of numerous subsidiaries in many European countries and on other continents is helping to expand our area of operation far beyond the borders of Austria and Germany. More information is available at www.strabag.com.

The STRABAG Group has been present in Poland since 1987. The company employs about 6,200 people and generates an output volume of around € 1.3 billion in the country. More information is available at www.strabag.pl. 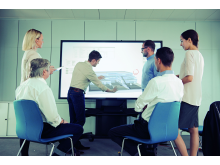 The design, construction and subsequent operation of the new building is being realised using the BIM 5D® (Building Information Modelling...