Few materials are as closely associated with great acoustics as wood. And rightly so: wood can be used to create very good-sounding and architecturally sophisticated concert halls. This also applies to the new interim quarters for the Munich Philharmonic that is being built by ZÜBLIN Timber using a modular timber design.

The usual home of the Munich Philharmonic is the Gasteig culture centre, one of the largest such venues in Europe. Located in the centre of Munich, Gasteig will be extensively renovated through the year 2026. The temporary concert in Munich-Sendling is currently under construction. General contractor for the interim structure is Nüssli GmbH (Germany), which commissioned ZÜBLIN Timber to handle the timber construction work.

The shell of the new interim venue, which will be used for a period of about five years, was recently completed. Currently, the wooden modules for the philharmonic hall, which has a gross floor area of around 6,700 m², are being assembled on the steel structure. Over the next five months, the team from ZÜBLIN Timber will be cladding the walls and the ceiling of the venue with acoustically optimised LENO cross-laminated timber from about 1,300 m³ of wood. The production and prefabrication of the at times oversized elements took place at the ZÜBLIN Timber factory in Aichach.

The solid cross-laminated timber elements consist of several layers of spruce wood glued together with the laminations oriented perpendicular to the adjacent layers. The largest modules being assembled for the interim concert hall in Munich measure 32.9 m² in size and weigh 4.5 tonnes. Sixty LENO cross-laminated timber elements have to be installed for the roof alone. Some of these have to be lifted into the steel structure from the outside, while others are brought in from the inside of the future building. Central challenges in this project include the presence of several different trades working on site at the same time, along with the associated lack of space, and the tight schedule.

ZÜBLIN Timber is scheduled to complete its works in March 2021, and the temporary concert hall should open its doors in autumn of the same year. Gasteig and all its associated institutions – including the municipal library and an adult education centre – will then gradually move into the alternative accommodation in Sendling.

ZÜBLIN Timber stands for ambitious and pioneered solutions in the field of timber construction. We are a single-source provider for the development, production, delivery, and execution of high-quality timber construction systems – from simple structural frames to complex timber engineering to turnkey project execution. We work hand in hand with our clients to develop efficient solutions and a sustainable quality of life: www.zueblin-timber.com 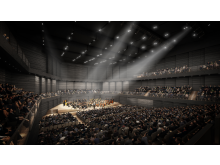 Rendering of the interim concert hall for the Munich Philharmonic. ZÜBLIN Timber has been commissioned to clad the ceiling and walls with... 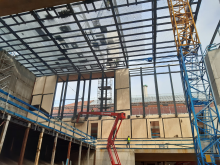 The team from ZÜBLIN Timber is currently assembling the timber modules on the steel structure of the Munich Philharmonic’s interim conce...