The core of a major infrastructure project in the heart of Karlsruhe has been successfully completed on time. Precisely on schedule, today consortium leader Ed. Züblin AG and its partner Schleith GmbH handed the extended shell of the 1.6 km “Kriegsstraße” road tunnel over to Karlsruher Schieneninfrastruktur-Gesellschaft mbH (KASIG). Following a construction period of four years and three months, the two tunnel lanes have been covered in asphalt, completing the complex construction of the shell. Once the technical works that now follow are completed, the tunnel and new above-ground light rail line are to be opened to traffic in mid-December. Following a separately constructed tram tunnel, it is the second part of the “Kombilösung” public transport infrastructure project, which will provide Karlsruhe's city centre with a new component for an efficient local public rail network and sustainably reduce the volume of traffic.

Outstanding, constructive cooperation a guarantee for success “Reciprocal, open, solution-oriented communication was a guarantee for success,” says Frank Nenninger, technical director at KASIG, summing up the completion of the work by the ZÜBLIN-led consortium. “We are proud to have mastered this technically and logistically demanding project successfully and on schedule. Despite disruptions in the construction process caused by the coronavirus pandemic, we even completed the extended tunnel shell a good week ahead of the deadline that was originally set," says overall project manager Roman Kühn from the leading civil engineering division of the ZÜBLIN subdivision in Karlsruhe. With “highly fragmented workflows” due to the constant change in provisional traffic routing, the logistics were the biggest challenge for the project team: “Over the past year, with ten cranes, we were operating in every construction site simultaneously," Roman Kühn reports. As a guarantee for success, he mentioned the close synchronisation of every trade group with the use of LEAN methods and, in particular, the outstanding communication and cooperation with the client: “The extremely constructive and always progress-oriented coordination with KASIG was an essential factor for the success of this construction project," Roman Kühn sums up.

The new tunnel relocates Karlsruhe's main traffic axis on Kriegsstraße between the Ludwig-Erhard-Allee junction and the Karlstor underground. The Ed. Züblin AG-led consortium constructed it as a cut-and-cover in a synthetic fibre-reinforced concrete frame: the works were divided into ten individual sites with waterproof excavation pits of up to nine metres deep that were covered in concrete and later sealed again with a lid. The city-centre buildings directly adjacent, the dense traffic flows partly crossing the route and the high groundwater level made the construction project a complex challenge. The ZÜBLIN project team was supported until the end of 2020 by Züblin Spezialtiefbau GmbH, whose expertise ensured, among other things, the waterproofing of the excavation pit.

Further details on this central infrastructure project in the city of Karlsruhe can be found at: www.diekombiloesung.de

Stuttgart-based Ed. Züblin AG, with more than 13,000 employees and an annual output of around € 4 billion, is one of Germany’s largest construction companies. Since its foundation in 1898, ZÜBLIN has been successfully realising challenging construction projects in Germany and abroad and today is the STRABAG Group’s leading brand for building construction and civil engineering. The company’s range of services covers all construction-related tasks – from complex turnkey construction, civil engineering and tunnelling to construction logistics, structural maintenance, ground engineering and timber or steel construction. In recent years, ZÜBLIN has been promoting the topics of digitalisation, LEAN.Construction and sustainability and – supported by the many years of experience of its Zentrale Technik competence centre – is also increasingly offering integrated design and construction from a single source as a general planner. When it comes to partnering, ZÜBLIN has set new standards with its teamconcept partnering model, which has proven its worth on the market for more than 25 years. Current construction projects of the company, a subsidiary of globally operating STRABAG SE, include the EDGE East Side Berlin high-rise project, the Rinsdorf and Rälsbach viaducts on the A45 motorway and the Boyneburg Tunnel on the A44. More information is available at www.zueblin.de. 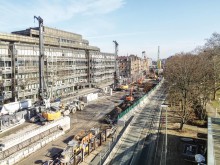