The construction of the international accelerator facility FAIR (Facility for Antiproton and Ion Research) has begun. The start of building construction and civil engineering work is a crucial moment for one of the largest construction projects for scientific research worldwide. Here, Züblin Spezialtiefbau GmbH is in charge of the planning and execution of the entire excavations including retaining works, dewatering and pile foundation. On July 4, 2017, the groundbreaking ceremony was held for the large ring accelerator SIS 100, which will be the key component of the future accelerator facility FAIR. The construction site is located to the northeast of GSI Helmholtzzentrum für Schwerionenforschung in Darmstadt.

FAIR will be a unique particle accelerator facility with an investment volume of more than €1 billion. The facility is being constructed by nine partner countries and is scheduled to go into full operation in 2025. Around 3,000 scientists from all over the world will work at FAIR, where they will gain groundbreaking insights into the structure of matter and the development of the universe. The key component of FAIR will be an underground ring accelerator with a circumference of 1,100 meters. Connected to it is a complex system of storage rings and experimental stations.

Over the past few weeks and months, extensive preparations have been made for the huge construction project. For example, work is already under way to connect the existing accelerator facilities of the GSI Helmholtzzentrum to the new FAIR complex. Retaining walls are being built and contracts have been awarded for the excavation and installation of the ring tunnel following a successful call for bids. These were important preparatory steps for the large-scale work on the FAIR infrastructure, which has now begun with the groundbreaking ceremony for the SIS 100 ring accelerator. The cutting-edge accelerator and experiment facilities will be installed after the new buildings are completed.

At the ceremony, government officials and scientists from Germany and abroad extended greetings and symbolically broke the ground with a shovel. This crucial milestone was attended by representatives from all nine partner countries.

In line with the groundbreaking ceremony, FAIR also began FAIR Phase 0 of its experimentation program in order to harmonize research operations with the progress of construction. Beam times are already being scheduled for researchers at existing GSI facilities and at components for FAIR. To conduct this research, scientists are using the GSI accelerator facilities, which have been substantially enhanced for their later use as preaccelerators for FAIR and will have their technology further upgraded in the future. Moreover, parts of FAIR can already be used, including the CRYRING storage ring.

About FAIR:
FAIR will be one of the largest and most complex accelerator facilities in the world. The centerpiece of the facility is a ring accelerator with a circumference of 1,100 meters. Connected to it is a complex system of storage rings and experimental stations. The existing GSI accelerators will serve as preaccelerators. Engineers and scientists are working in international partnerships to advance new technological developments in a number of areas, such as information technology and superconductor technology. Around 3,000 scientists from all over the world will be able to conduct top-level research at FAIR. Their outstanding experiments will generate new fundamental insights into the structure of matter and the evolution of the universe. Alongside Germany, the partner countries of FAIR GmbH are Finland, France, India, Poland, Romania, Russia, Sweden, and Slovenia. The United Kingdom is an associate partner.

+++ FAIR: one of the world’s largest and most complex construction projects for international cutting-edge research +++ Consortium of Ed. Züblin AG, Züblin Spezialtiefbau GmbH und STRABAG AG to build the extended shell for the southern section of the facility +++ Contract value of approx. € 220 million +++ 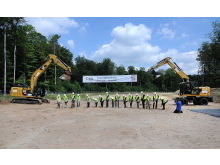 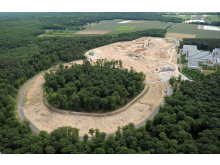