The topping-out ceremony for Alexander-Quartier took place yesterday afternoon in the presence of numerous guests from politics, business and the media. The urbane and lively city development with hotel and office use is being built in the immediate vicinity of Berlin’s Alexanderplatz and the Alexa department store. General contractor for the eleven-story hotel and office complex (including basement and attic floors) is ZÜBLIN.

The modern mixed-use development being built on an approx. 4,900 m² plot of land offers a gross floor area of 29,560 m² with 475 hotel rooms and 8,300 m² of office space as well as an outdoor fitness area, a restaurant with bar, and library and study areas. ZÜBLIN is building the underground car park and the hotel wing turnkey and the office section as a shell. The Stuttgart-based construction company is also carrying out the façade work. The sculptural façades are divided into a base area topped by standard floors and staggered/stepped floors.

The client of the project, which has a value in the high double-digit million euro range, is, for the office portion, a project company of the European Student Housing Fund and, for the hotel portion, a joint venture consisting of European Student Housing Fund (70 %), represented by Frankfurt-based BaseCamp Student GmbH, and The Student Hotel (30 %), which will also operate the hotel. The building was designed by KSP Jürgen Engel Architekten, with construction design by pbr Planungsbüro Rohling AG. Overall completion of Alexander-Quartier is scheduled for the second half of 2019.

Michael Stange, technical director of ZÜBLIN’s Thuringia business unit, praised the partnership-based cooperation with the client: “Works by the Berlin public transport company on the metro tunnels beneath the building have delayed the construction of Alexander-Quartier by several months. Together with the client, we have found solutions to speed up the timetable, so that the hotel can still expect to be operational as planned on 1 September 2019.”

International student hotel and office space for WeWork
“The Student Hotel Berlin will connect students and start-ups, freelancers and the local neighbourhood,” says Charlie MacGregor, founder and CEO of The Student Hotel group. “We look forward to continuing our German adventure in Berlin, a city which, like The Student Hotel, has been a shelter for a young and international community.”

The Student Hotel group currently has some 4,500 hotel rooms in Amsterdam, Rotterdam, The Hague, Eindhoven, Maastricht, Groningen, Barcelona, Florence, Dresden and Paris. More rooms will be coming soon in Berlin and Bologna. By 2020, additional locations with a total of 15,000 beds are to be available to guests through acquisition and development in Germany, Italy, France, Spain, Portugal and the United Kingdom.

The company WeWork, which designs, builds and operates modern and flexible work areas around the world, has already signed the lease for 8,000 m² of office space including outside areas.

Characteristic architecture in the heart of Berlin
Hannes Meisehen, architect and head of the Berlin office of KSP Jürgen Engel Architekten, describes the new urban landmark as follows: “We sought a common architectural expression for the two different uses of office and hotel which at the same time makes the respective types of use visible. The façade design is characterised by a clear structure, a bright and friendly appearance, and obliquely cut window reveals that visually increase the window openings. The use of large-scale architectural concrete elements (office) and a plaster façade (hotel) subtly differentiate hotel and office use. The sculpturally formed window reveals and the storey-wise change of direction give the building complex its characteristic appearance.” 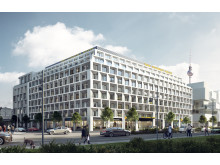 Hotel portion of Alexander-Quartier in Berlin. 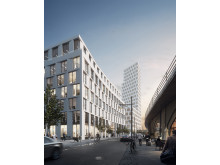 Office portion of Alexander-Quartier in Berlin. 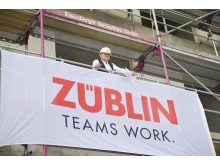