Stuttgart, 1 September 2017 The supervisory board of Ed. Züblin AG has appointed Dr. Ulrich Klotz (50) to the company’s management board with effect from 1 September 2017. Together with board member Klaus Pöllath, Klotz will share technical responsibility for the building construction and civil engineering business in Germany, Benelux and Scandinavia. The civil engineering graduate is returning to ZÜBLIN after a seven-year absence. He had already worked for the German market leader in building construction and civil engineering from 1993 to 2010, most recently as managing director of Züblin International GmbH. In May 2010, Klotz had moved to Munich-based TÜV SÜD AG where he was responsible for the global business in the real estate and infrastructure segment.

Klotz initially completed carpentry training before studying civil engineering at the Stuttgart Technology University of Applied Sciences. He later earned a Master of Science in Geoenvironmental Engineering from the University of Colorado. In the year 2000, he received a doctorate degree from City University of London. 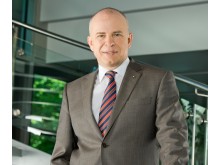 Dr. Ulrich Klotz appointed to the management board of Ed. Züblin AG