Ilse Aigner, Bavaria’s Minister for Economic Affairs and Deputy Minister-President of the southern German state, paid a visit to ZÜBLIN’s Bavaria subdivision on 17 July 2017. Following speeches by the minister and by Klaus Pöllath, member of the management board of Ed. Züblin AG, the focus shifted to a dialogue among the guests, which included employees and managers of ZÜBLIN.

The focus of discussion was on the current economic situation in Germany in general and in Bavaria in particular. The dialogue centred on issues such as the lack of skilled labour as well as energy, technology and challenges facing the construction sector.

Minister Aigner stressed the importance of the construction industry as a key sector of the economy: “Construction is booming. Last year, the industry registered revenue growth of nearly 4 percent and a 10 percent increase in orders compared to 2015. ZÜBLIN has been an important player in Bavaria for almost 70 years and its move to Munich reinforces its activities in Bavaria. This is especially true for the current challenges of digitalisation on the construction site, energy efficiency and the housing shortage in the metropolitan areas.”

“The dialogue with politicians is very important for us. It helps us to strengthen the mutual understanding and to better approach opportunities and challenges for our company,” says Klaus Pöllath, adding: “We still have a lot planned in Bavaria: Our agenda includes the further expansion of our core business in building construction and civil engineering as well as the strengthening of our project development business in building construction with STRABAG Projektentwicklung GmbH in Munich.”

ZÜBLIN launched its activities in Bavaria in the early 1950s with a focus on civil engineering and tunnelling. Today the range of services covers all imaginable building construction and civil engineering tasks. In addition to the headquarters in Munich, the sub-division also maintains offices in Regensburg, Ingolstadt, Nuremberg, Straubing, Bayreuth and Würzburg.

Some of the key large projects of the past few years are the construction of the new ADAC headquarters in Munich, various large projects for Audi AG in Ingolstadt and Neckarsulm, more than 5,000 residential units in all of Bavaria, as well as office and administration buildings for several different companies.

For more information and references about the Bavaria subdivision: 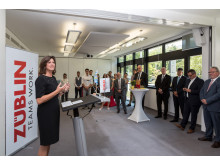