Axel Towers is already called Copenhagen's new landmark, and from its location opposite Tivoli, the five combined towers rise in various heights of 28 to 61 meters.

Axel Towers is the first teamconcept project to be completed in Denmark, and ZÜBLIN has been involved as general contractor since the planning phase with design development and optimization as well as construction pit, structural works, installations, facades and interior.

Architect Lene Tranberg from Lundgaard & Tranberg, who designed the building, praise in her speech to the Crown Prince ZÜBLIN for the efforts as a general contractor and emphasized our quality-conscious and solution-oriented approach to the project.

We proposed for example as the only contractor to construct the towers with in situ concrete, which both gave the client an economic advantage and at the same time led to a nomination of ZÜBLIN at the Danish Concrete Association's annual in situ award ceremony.

The total area of the building is 41,000 m2 and the first tenants have already moved in. The law firm Gorrissen Federspiel has taken over 2/3 of the towers, Starbucks, Klarlund and Peter Beier Chocolate has opened on the ground floor and later the Michelin restaurant AOC opens a sky bar in one of the towers.

With the completion of Axel Towers, ZÜBLIN has really made our mark in the Copenhagen cityscape, and it is a project we can all be proud to have contributed to. 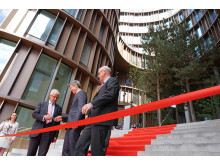