Twenty-eight chalice-shaped concrete pillars will carry the roof of Stuttgart’s new underground train station, a part of the Stuttgart 21 rail project. The formwork required for these pillars is a true masterpiece of engineering, even if that may not be apparent at first glance. The concreting works for the first pillar, about 12 m tall with an opening for a “light eye”, have now been successfully completed.

New through station for Stuttgart
Stuttgart 21 involves the complete reorganisation of the Stuttgart rail hub to better connect one of Europe’s strongest economic regions to the European high-speed rail network. The works include digging 59 kilometres of tunnels beneath the state capital, which has around 620,000 inhabitants, and building four new stations. The rail project should significantly reduce travel times, which will benefit more than ten million passengers throughout Germany every year. The removal of the current track field will create a total of 100 hectares of open space for urban development including housing and additional green space.

At the heart of Stuttgart 21 is the future through station, construction of which is in full swing. An important feature of the project is the preservation of the old station building from 1922. The historically listed building, designed by architect Paul Bonatz, will be connected to the new through station. ZÜBLIN has a very special part to play in this project: its mission is to build a work of art. That’s exactly what you’d call the 28 chalice-shaped pillars that will carry the roof of the new station. Nothing quite like this has ever been built before.

Partnering with ZÜBLIN teamconcept
To carry out a project of this scale and ambition, it is necessary to bring in expertise from many different units across the entire company. Ed. Züblin AG’s Stuttgart Subdivision and Züblin Ground Engineering are responsible for construction work in the PFA 1.1 sector. This part of the project is valued at € 330 million, and work started at the site in August 2014. STRABAG GmbH Subdivision Baden-Württemberg is on board as a subcontractor responsible for the drainage system and road construction work, as part of a deal with a volume of € 13.5 million.

Experts from Züblin Timber are also supporting the Stuttgart subdivision in this project, based on the tried-and-tested teamconcept partnering model. Ottmar Bögel, head of large-scale projects at ZÜBLIN, explains, “The teamconcept principle brings together all the skills required for a project and connects them in a network, from start to end. This allows us to optimise costs, scheduling and quality.”

Custom work thanks to digitalisation
Each of the 28 chalice-shaped pillars carrying the roof construction will weigh around 1,000 t. They will range in height from 8.5 to 13 m and will be built using a sophisticated formwork construction into which a special type of concrete is poured. The shell of the first pillar has now been completed. On the third Saturday of October 2018, 700 cubic meters of concrete, delivered in more than 100 mixer loads, flowed into the complex formwork. Apart from the architecturally placed joints in the formwork sheathing, no other joints are to be visible on the surface. The face of the concrete is supposed to be absolutely smooth and non-porous.

The formwork moulds are produced in Aichach, a small town in Bavaria. Andreas Amorth, ZÜBLIN Timber team leader and product manager, is one of the specialists working on this part of the project. “Projects like this one would be unthinkable without digitalisation,” he says, pointing at an orange-coloured robot arm that is driving a router bit through a block of wood. “This 8-axis CNC robot is normally used for building car bodies in the automotive industry. We are using a modified version for high-precision wood cutting with spindle speeds of up to 18,000 rpm,” Amorth explains. The tool paths are derived directly from the architectural model via a parametric interface.

Formwork construction at its most challenging
The production of the formwork elements is extremely challenging due to the complex geometries that have to be achieved. As if that alone wasn’t difficult enough, the 28 chalice-shaped pillars also vary in form, angle and height. A total of approximately 500 individual parts have to be produced for the project. Many of them weigh more than 5 t and have to be transported to the building site by special vehicles, escorted by police cars. Up to 180 trips are required. Most of the moulds are intended for repeated use, some of them for over 20 castings. Additional elements are used at the bases and the edges of the structures to accommodate the variations in geometry.
When Ottmar Bögel recalls one of the milestones of the project, you can sense his excitement. “It was a very emotional moment when we completed the base of the first chalice-shaped pillar in June 2017. It was the fruit of two-and-a-half years of hard work, extensive theoretical deliberations, detailed model calculations, real-life experiments, and discussions with experts. All that was needed just to begin the development of the whole construction process as you can see it being implemented today,” says Ottmar Bögel. Andreas Amorth adds, “For quality assurance, we even acquired a 3D scanner to compare the completed moulds with the desired target specifications. To do that, we used an integrated BIM 5D environment with an integrated data workflow.”

A science in itself
The work isn’t done once the routed spruce timber moulds are cut. They also need to be coated before they can be used at the construction site. Architect Christoph Ingenhoven asked for smooth concrete surfaces without any visible marks. To achieve this vision, a lot of thought and expertise had to go into the coating process. Applying a formula that was specially developed for this project, the elements are coated with a mixture of different resins to achieve ultra-smooth surfaces. “We specifically set up a new coating line and obtained expert advice from chemists and specialists working in shipbuilding and aerospace engineering,” says Andreas Amorth.

A project like this shows that the effective teamwork needed to create a work of art is truly an art in itself. 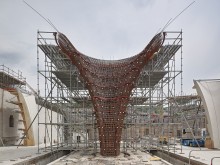 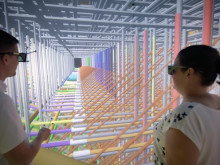 With the construction of the chalice supports for the Stuttgart 21 project, Züblin is nominated for bauma innovation award 2019.