ZÜBLIN Timber, the timber construction subsidiary of Ed. Züblin AG, has received an award for its Regensburg Synagogue project in the renowned GEPLANT+AUSGEFÜHRT architecture competition presented by Internationale Handwerksmesse (IHM), the construction, renovation and refurbishment fair. In 2019 the Jewish community of Regensburg inaugurated its new synagogue in the centre of the old town of Regensburg on the site of the synagogue that was destroyed in 1938. With a delicate, biaxially curved dome shell made of solid cross-laminated timber (CLT) elements, the building is not only an architectural but also a structural highlight. The use of multiply curved CLT parts is an absolute novelty. ZÜBLIN Timber, which oversaw the steel and timber construction of the dome roof from the technical side, produced 20 massive, large-format LENO® cross-laminated timber components made of cross-laminated spruce panels.

The annual GEPLANT+AUSGEFÜHRT competition recognises examples of successful architecture that would not be possible without craftsmanship. Each prize is awarded twice: to the architectural firm and to one of the construction contractors involved. Due to the coronavirus crisis, the award ceremony could not take place this year as usual at the IHM trade fair in Munich, but it should be rescheduled as part of the GEPLANT+AUSGEFÜHRT travelling exhibition.

LENO® is the ZÜBLIN Timber product name for cross-laminated timber. The product is typically manufactured as a flat panel and is used as a load-bearing element (wall/ceiling/roof) in residential and commercial buildings. LENO®-3D extends this conventional way of building (use of flat panels) by adding the possibility of planning and realising curved surfaces in two or three dimensions. The structural, load-bearing function of flat cross-laminated timber components remains unaffected even with LENO®-3D. The possibility of having a large variety of decorative wooden surfaces removes nearly all restrictions in terms of design. LENO® is a unique product of which ZÜBLIN Timber is currently the only manufacturer.

The advantages of LENO® at a glance: 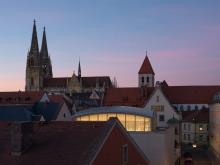 View of the Regensburg skyline with synagogue 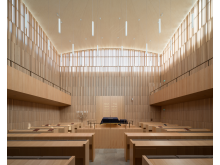 Inside view of the new synagogue in Regensburg